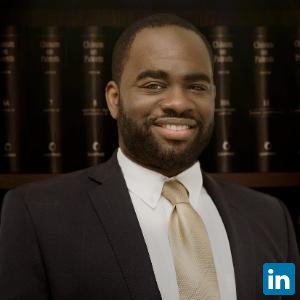 "Herbert T. Patty, Esq. is a Registered Patent Attorney licensed to practice law in California and licensed to represent inventors and companies before the United States Patent and Trademark Office (“USPTO”). Mr. Patty has over ten years of Intellectual Property (IP) experience which includes drafting and filing patent applications, filing and prosecuting trademark applications, licensing IP assets, and managing trade secret matters. Prior to becoming an attorney, Mr. Patty worked as a process engineer at Intel’s high-volume- manufacturing factory in Chandler, Arizona. Later, Mr. Patty transferred to Intel’s legal department where he performed patent licensing and patent prosecution duties. Mr. Patty has also worked for boutique IP firms in Silicon Valley working primarily on licensing, patent prosecution, and pre-litigation matters. Mr. Patty graduated from Georgia Tech (class of 1999) with a degree in Mechanical Engineering and from Santa Clara University’s School of Law (Class of 2007) with a Juris Doctor degree and certificate in High Technology Law. Known to family and friends as “Teddy,” he currently works and resides in San Jose, California. Mark’s legal expertise includes complex litigation in federal and state courts throughout the country. Mark has represented businesses, consumers, investors, and public entities concerning many types of legal matters, including commercial disputes, unfair and deceptive business practices, breach of fiduciary duty, breach of contract, fraud allegations, antitrust, and data privacy. Mark’s legal experience includes consumer, securities, whistleblower, and Internet litigation at prestigious law firms in the Bay Area. Mark has also played a significant role on litigation teams in complex litigation and class action cases that recovered millions of dollars for consumers, investors, and businesses. Mark is a member of the California Bar and is admitted to practice in the United States District Courts for the Northern, Central, and Southern Districts of California. Elizabeth Anne (Liz) Nevis, Esq. is a transactional attorney with experience in intellectual property (IP), entrepreneurial law, and cultural property. Liz’s experience includes patent and trademark applications, business contracts, business entity formation, and regulatory and administrative matters. Liz became a Registered Patent Attorney after graduating from Lewis and Clark Law School in 2006 and was admitted to the California bar in 2007. Before law school, Liz received an Astronomy B.S. from the University of Illinois and an Electrical Engineering M.S. from the University of New Mexico, followed by over a decade of photonics R&D as an individual contributor, project lead, group manager, and solo consultant with twelve patents as an inventor. Aside from relatively brief stints in New Mexico, Texas, Florida, southern California, and Oregon, most of Liz’s professional life has been spent in Silicon Valley, where she still lives and herds cats today. Nafisa J. Khwaja, Esq. Nafisa is a transactional attorney with expertise in intellectual property law. Her experience includes domestic and foreign trademark prosecution, licensing and settlement agreements, and copyright matters. She summered at the United States Patent and Trademark Office, where she conducted extensive research in trademark policy. Nafisa graduated from the University of California, Irvine in 2008 with bachelors degrees in Criminology and Political Science. She graduated from Whittier Law School in 2014 with a Juris Doctor degree and Certificate in Intellectual Property Law. She is licensed to practice law in California. The Law Office of Herbert T. Patty 1625 the Alameda, Ste. 407 San Jose, CA 95126 info@htplaw.com Phone 408-823-0640 (B) Phone (408) 549-9931 (F) [He's] clearly one of the brightest I've ever seen... he is a step above the rest, and I'd use his services again and again.."

"Teddy was always a pleasure to meet with and eager to go above and beyond what I had expected. Due to his diligence and knowledgeable work on my patent application he has deserved a strong recommendation from me and I will surely return with other legal work in the future."

Want to work with Herbert Patty?